What started as a slap in the face turned into a deadly shooting in Clay County FL.  Action News of Jacksonville reported that: 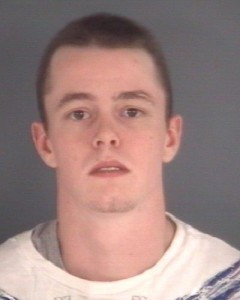 “A Clay County woman was shot and killed at a party in Middleburg early Saturday morning…. According to police, Elliott Orsborn, 26, and Jamie Martin got into a verbal argument. She slapped him and he pulled a gun out and shot her in the forehead, police said. When deputies arrived to the scene they found Martin in the garage…. Officers tell Action News the investigation revealed Martin lived at the home where the party took place, off Ashton Street, with her boyfriend, two kids and a roommate…. Martin was transported to Orange Park Medical Center where she was pronounced dead.”

It appears that there maybe many eyewitnesses to the event, because “police say Martin had several friends around on the night she was killed.”  The incident likely happened around midnight as the Clay County Sheriff’s Office “received the call between around 12:30 a.m.” One of the problems with eyewitnesses is credibility and the ability to remember the events clearly.  I am assuming that people were drinking alcohol at this party.  They may have been drinking for several hours.  This can affect a person’s ability to remember details.  Also, witnesses are sometimes reluctant to speak to police or criminal lawyers.  They may not tell detectives or attorneys everything that they know about a case.  In my experience as a Jacksonville criminal attorney, I have seen another problem with cases similar to this one.  When you interview eyewitnesses that have been in a party scene, their stories often conflict.  They tend to remember a different version of the events.  This may be due to drug or alcohol consumption.  It may also be due to the witnesses discussing the events among each other.  Witnesses usually immediately discuss what they witnessed.  This can impact their recollection of the events.

Florida’s self-defense laws permit someone that is being attacked to meet force with force.  The force that is used must be reasonable.  This means that you cannot shoot someone for slapping you.  In general, a simple battery should not lead to the use of deadly force.  In the Clay County case above, there would need to be much more to the story in order for Osborne to use deadly force against Martin.  It appears that she did not have a weapon.  There is also nothing in the story about injuries to Osborne.  The news article is not the entire story.  This is just the beginning of this criminal case.  The Clay County attorneys in this case will begin the discovery process. There will be reports that they need to go through.  Police likely took written statements from the witnesses at the scene.  The lawyers are going to want to speak to all of the witnesses.  There may be witnesses that the police do not know about, such as people that left the party after the shooting but before police officers arrived.  The criminal attorneys will need to view photographs and evidence.  They will conduct depositions of the police officers, detectives, eyewitnesses and anyone other witnesses in the case.   This may result in evidence of self-defense, which would aid the defense, or it will support the state attorney’s case of murder.