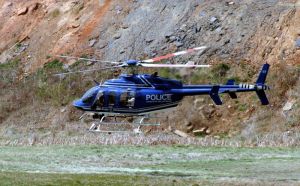 Last night, a woman was arrested for domestic battery in Jacksonville Florida. “Sgt. Matthew Clements with the Jacksonville Sheriff’s Office told Action News that Trishawnna R. Mitchell, 32, was arrested Sunday night on a misdemeanor charge of domestic battery for an incident that occurred in the 800 block of McDuff Avenue.”  After being arrested, she was transported to the Duval County Jail located on Adams Street.  Before Michell was booked, she “managed to free one of her hands from her handcuffs and run through an open door of the jail while officers and vehicles were entering and exiting.”  She ran away from the jail, and “multiple investigators were called in including K-9 officers and air units to search the area.”  Mitchell fled at approximately 12:15 a.m. this morning.  The Jacksonville Sheriff’s Office did not receive information about her whereabouts until 7:30 a.m.

When Mitchell was originally arrested, she was only facing a misdemeanor charge of domestic battery.  Now, she “faces an additional charge of escape along with a charge of domestic battery.”  This will certainly hurt a Jacksonville criminal lawyer’s chances of arguing for a lower bond.  When setting a bond or non-monetary condition of release, such as an “ROR” or release on your own recognizance, the judge must follow Florida Rule of Criminal Procedure 3.131.  The judge will look at a variety of factors.  Rule 3.131(b)(3) states:

“In determining whether to release a defendant on bail or other conditions, and what that bail or those conditions may be, the court may consider the nature and circumstances of the offense charged and the penalty provided by law; the weight of the evidence against the defendant; the defendant’s family ties, length of residence in the community, employment history, financial resources, need for substance abuse evaluation and/or treatment, and mental condition; the defendant’s past and present conduct, including any record of convictions, previous flight to avoid prosecution, or failure to appear at court proceedings; the nature and probability of danger that the defendant’s release poses to the community; the source of funds used to post bail; whether the defendant is already on release pending resolution of another criminal proceeding or is on probation, parole, or other release pending completion of sentence; and any other facts the court considers relevant.”

In Mitchell’s domestic battery and escape case, her actions tell the judge that she is a flight risk.  She would fall under “previous flight to avoid prosecution” under the rule above.  This is going to cause her to have a higher bond than if she had only been arrested for a misdemeanor without any sign of fleeing.  Mitchell’s Jacksonville criminal attorney will want to go through other factors in the rule with her to try to lower the bond.

There is still the question of how this happened at the Duval County Pretrial Detention Facility. “Ivey says the incident will be looked at for any potential policy violations.” (Fox News of Jacksonville)