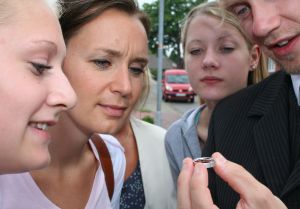 Perhaps, the wedding ring is evidence that they are not breaking the law? The marriage certificate would be better.

I remember my second day as a Duval County attorney at the Office of the Public Defender.  On my first day, I did a lot of paperwork, met the other criminal attorneys that I would be working with, and settled into my office.  The second day was very different.  I went directly to court with a huge stack of files and started defending my new clients.  I remember having a lot of Jacksonville domestic violence cases.  Some were Jacksonville domestic battery misdemeanor crimes.  Others were Jacksonville violation of an injunction charges.  I also had Jacksonville probation violations that were based on family issues.

When I first became a Jacksonville criminal lawyer as a public defender, I did not see all of the sides of a Florida domestic violence case.   As a private Jacksonville lawyer, I see all aspects of the case.  It is very hard for anyone to handle.  Some people represent themselves pro se.  Some of them hire an attorney that does not understand domestic violence situations.  As a Jacksonville criminal defense attorney, I thought that I had handled just about every domestic crime that was out there.  I was wrong.

With so many Florida family laws and criminal laws, you would think that we would not need the ridiculous ones.  I read an article today on yahoo.com that informed me that we have an obscure and unenforced law that many of us are breaking or have broken in the past.  The article was about a Virginia cohabitation law, but mentioned Florida law.   The Yahoo article stated:

“A Virginia law dating to the 1800s states that it is illegal for ‘any persons, not married to each other, [to] lewdly and lasciviously associate and cohabit together,’ though officials say the law has not been enforced for decades.  However, as recently as the 1990s, prosecutors attempted to use the law to take away a day care license from a childcare provider. Darlene K. Davis, 73, told the Post a state inspector attempted to take away her day care license after learning that Davis had been living with her boyfriend for 16 years.”

The article further stated that “Florida, Michigan and Mississippi have similar laws banning cohabitation.  In 2011, a Florida lawmaker attempted to revoke the Sunshine State law, which carries a penalty of $500 or up to 60 days in jail.”  I had never read this Florida law, so I decided to find it.  It is Florida Statute 798.02.  The Florida law states:

“If any man and woman, not being married to each other, lewdly and lasciviously associate and cohabit together, or if any man or woman, married or unmarried, engages in open and gross lewdness and lascivious behavior, they shall be guilty of a misdemeanor of the second degree.”

I also found an article about the Florida cohabitation law.  The cohabitation law is in the same category with Florida Statute 798.01, which also makes adultery a misdemeanor.  The two laws are not used anymore, but there was an exception.  There was a “2006 case when a Jacksonville woman got her husband handcuffed for cheating. During this case, Jacksonville Sheriff’s Office Spokesman Ken Jefferson told the media, “It’s not generally reported and out of 20 years in law enforcement, I’ve never seen a person arrested. But, it is on the books.” (Unmarried couples could go to jail for living together in Florida)

As a lawyer in Jacksonville, all I can say is “Just when I think that I have seen them all….”