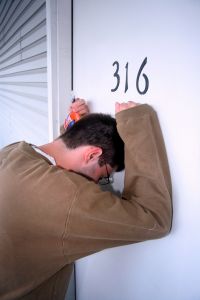 Florida domestic battery cases occur frequently.  There are many people that need to apply for Jacksonville restraining orders in order to protect themselves.  When a Jacksonville criminal lawyer has a domestic battery case, it is usually a “he said, she said” situation.  Domestic violence accusations often come up in Jacksonville divorce cases.   Sometimes, it involves false accusations of domestic abuse in order to obtain the upper hand in the litigation.  This can lead to the husband or wife filing a Florida injunction for protection against the other spouse based on lies.  Then, the other party must defend against the Jacksonville restraining order.

“A woman was shot but not killed Thursday night in a shooting in Northwest Jacksonville during what police say appeared to be a domestic dispute.  Detective M.J. Von Eiff said officers were called to a home in the 2300 block of Wylene Street about 6:40 p.m. and found the 34-year-old victim shot in the abdomen. He said the woman was taken to Shands Jacksonville hospital where she was being treated for her injuries.  Von Eiff said the shooting happened in the front yard. He said no one had been taken into custody.”

“Police say a central Florida woman nearly drowned when he husband held her face down in their dog’s water bowl during an argument over frozen pizza.  The Daytona Beach News-Journal ( http://bit.ly/SVJM79) reports the argument started as the couple sat down to watch TV Wednesday night and eat pizza. Richard Watson complained that the crust was raw and flung his plate into the front door. Debra Watson then tossed her plate on the floor.  Police say her husband tackled her and shoved her head into the dog bowl. Debra Watson broke free. But a police report says her husband tried to strangle her.  Richard Watson is charged with attempted murder and battery.  Police say a Volusia County man killed his roommate earlier this week during an argument over pork chops.”

Are you defending a Florida domestic battery case?  Were you arrested for Jacksonville violation of an injunction?  Do you need a restraining order against someone that you are afraid of?  Were you served with a Florida Petition for an Injunction Against Violence?  Regardless of your situation, call a Jacksonville lawyer for help.  Call 20 Miles Law at 904-564-2525.  It is important to know that you may not be able to Clear Jacksonville Domestic Battery From Florida Criminal Record.  If you charges were dropped, you may be able to erase a domestic battery arrest if you expunge your Florida criminal record.  If you pleaded guilty or no contest to a domestic battery charge, you cannot seal this.