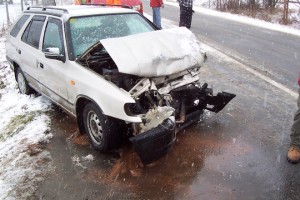 If you cause an accident involving death or serious bodily injury and your FL license is suspended, you may be facing a felony.

You may be arrested for a third-degree felony if you are caught driving on a suspended or revoked license as a Florida habitual traffic offender. Driving on a suspended or revoked license may also become a felony if you cause a car accident that results in death of serious bodily injury. Today, I read an article that made me think of this Florida criminal law. The article was titled, Driver in pedestrian death charged with driving on suspended license. The article read:

“A driver whose pickup struck and killed a pedestrian on Jacksonville’s Southside Wednesday morning was arrested for driving on a suspended license along with drug charges, authorities said. Robert John View II, 24, was behind the wheel of a 1994 Ford F150 heading east on Atlantic Boulevard about 6 a.m. when it struck a pedestrian, later identified as Larry Anderson, near Acme Street as he crossed the road, according to an arrest report. Anderson, 58, was knocked to the pavement and pronounced dead at the scene. He was not in the intersection or the crosswalk when he was hit, police said.”

The driver was arrested on a few misdemeanors. He was arrested for knowingly driving on a suspended license, possession of less than 20 grams of marijuana, and possession of drug paraphernalia in Jacksonville. According to the news article, View’s drivers license was recently suspended due to a Jacksonville DUI arrest, but the report seems to indicate that police did not suspect that View was driving under the influence at the time of this accident.

As a Jacksonville criminal defense lawyer, there are a few things that I would pay attention to in a case like this one. First, I am assuming that police are conducting a further investigation of the accident. They will need to review the evidence and speak to witnesses to determine the cause of the accident. A person that drives on a suspended or revoked license and causes an accident may be charged under Section 322.34(6). This Florida suspended license law states:

If View were not being careless or negligent, this would not apply to him. View has been arrested for a misdemeanor and has not been charged with a felony, but the Duval County State Attorney’s Office will be the one making a filing decision on the case.

Another potential problem that I see is the prior driving under the influence arrest. The article stated that View’s drivers license was suspended due to a DUI charge. If that is the case, his Jacksonville criminal lawyer will need to see if the case is open or closed. If it is open, there is a problem. The case may be still pending. When your are arrested for driving under the influence in Jacksonville, you may plead not guilty and bond out of jail. If you do this, your case is still open until it is resolved. When you have been released on bond, you cannot have any new criminal violations. You cannot be arrested again. If you are, your bond may be revoked. If your bond is revoked, you will be held in the Duval County Jail while your case is pending.

In View’s case, the article did not give enough information. He may only have the new driving on a suspended license and drug offenses pending. His DUI case may be open or closed. This is something that his attorney will certainly address.