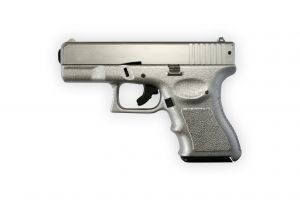 Guns Stolen From Cars in Jacksonville

It’s never a good idea to leave your car unlocked. It is an even worse idea to leave your car unlocked when you have valuables in your vehicle. Most people would consider a gun a valuable item. Guns are also dangerous when placed in the wrong hands. By leaving your firearms in an unlocked car, you are giving another person easy access to your weapon. While this may seem obvious, guns are stolen from cars. In fact, this scenario occurred over 4th of July weekend in Jacksonville FL. Channel 4 News of Jacksonville reported that six unlocked cars were burglarized over the weekend and eight firearms were stolen.  The news article did not state whether or not any arrests have been made in connection with this case, so I am assuming that no one has been arrested. If someone is arrested, what charges will they be facing? Let’s look at the Florida grand theft law and Florida burglary law.

When it comes to the Jacksonville thefts that occurred over 4th of July weekend, this is more than just a basic grand theft. Motor vehicles were burglarized. We need to also look to the Florida statute for burglary.

An automobile is considered a conveyance under Section 810.011(3) of the Florida Statutes which defines conveyance as “any motor vehicle, ship, vessel, railroad vehicle or car, trailer, aircraft, or sleeping car.”

When you read the burglary to a conveyance law set forth above, you may be thinking, “If a person steals a gun from a car in Jacksonville FL, he or she will be arrested for a third degree felony.” This is not true. Pay attention to the portion of the Florida burglary law that states “is not and does not become armed with a dangerous weapon.” When a person breaks into a vehicle and takes a gun, he or she has become armed and dangerous. In this case, Florida Statute Section 810.02(2) would apply, and this law states:

“Burglary is a felony of the first degree, punishable by imprisonment for a term of years not exceeding life imprisonment or as provided in s. 775.082, s. 775.083, or s. 775.084, if, in the course of committing the offense, the offender…. is or becomes armed within the dwelling, structure, or conveyance, with explosives or a dangerous weapon.”

Regardless of the circumstances, theft and burglary are serious crimes. When a firearm is involved, that complicates matters. If you have been arrested, it is important to talk to a Jacksonville criminal attorney about your case and your defenses. Call 20 Miles Law at (904) 564-2525 to speak to a Jacksonville lawyer.