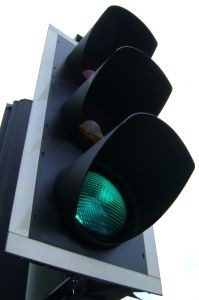 Imagine that you are driving down the street in Jacksonville FL. You are on your way home to Atlantic Beach. You are at a green light and you need to make a left turn. Do you make the turn? It depends. You may make a left turn unless it is otherwise prohibited. You must yield to anyone else that has the right away. This means waiting for pedestrians walking across the crosswalk. This also means waiting for oncoming traffic to pass. You have likely seen or heard of accidents that occurred when a driver tried to make a left hand turn without having enough time to clear it. For instance, you are driving east and need to make a turn to travel north. You make a left turn, and a person driving west runs into the passenger side of your vehicle. You thought that you had enough time to make it through the intersection, but you did not. You were given a ticket for failure to yield to oncoming traffic.

If this has happened to you, you are not alone. The same thing happened to a Jacksonville police officer yesterday afternoon. This car accident caused a traffic jam on Beach Boulevard near University Boulevard which is a busy intersection.

According to the Florida Highway Patrol, a police officer in a Jacksonville Sheriff’s Office police car “was attempting to make a left-hand turn from the center median on Beach Boulevard into a parking lot. Two cars in the eastbound lanes were stopped and allowing the officer to go, but a car in the third lane, which is a turning lane, didn’t see the officer and their vehicles collided…. The officer is being held at fault.” (Channel 4 News Jacksonville)

The driver of a vehicle intending to turn to the left within an intersection or into an alley, private road, or driveway shall yield the right-of-way to any vehicle approaching from the opposite direction, or vehicles lawfully passing on the left of the turning vehicle, which is within the intersection or so close thereto as to constitute an immediate hazard. A violation of this section is a noncriminal traffic infraction, punishable as a moving violation as provided in chapter 318.

1. Vehicular traffic facing a circular green signal may proceed cautiously straight through or turn right or left unless a sign at such place prohibits either such turn. But vehicular traffic, including vehicles turning right or left, shall yield the right-of-way to other vehicles and to pedestrians lawfully within the intersection or an adjacent crosswalk at the time such signal is exhibited.
2. Vehicular traffic facing a green arrow signal, shown alone or in combination with another indication, as directed by the manual, may cautiously enter the intersection only to make the movement indicated by such arrow, or such other movement as is permitted by other indications shown at the same time, except the driver of any vehicle may U-turn, so as to proceed in the opposite direction unless such movement is prohibited by posted traffic control signs. Such vehicular traffic shall yield the right-of-way to pedestrians lawfully within an adjacent crosswalk and to other traffic lawfully using the intersection.