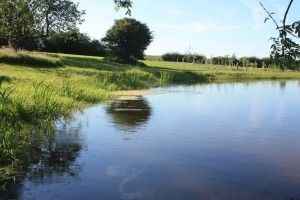 Truck found in pond may tesult in DUI or other driving charges.

The Jacksonville Sheriff’s Office is looking for a vehicle that was found over the weekend submerged in water. The driver could not be found near the accident site. First Coast News of Jacksonville reported, “A white pickup truck was traveling south bound on Old St. Augustine Road around 12:45 a.m. when the vehicle went across the north bound lanes of traffic, hit an embankment and went into the pond and rolled over.”

The facts as presented in the news story indicates that the police expect that the driver was driving under the influence of alcohol in Jacksonville FL. It appears that JSO has found the owner of the truck, because “JSO says the truck is owned by the father of the 21-year-old who took the truck out Sunday night.” The 21-year-old son was not found in or near the vehicle. “Police say they believe the driver was ejected and walked away or he was able to swim out of the truck.” While the crash itself does not indicate that police are conducting a DUI investigation, another part of the news story does. The article stated that police found a case of beer in the truck.

I am not sure if police made contact with the son who is likely the suspected driver during the accident, but the time between the accident and contact with the son will likely make a difference when it comes to the DUI investigation. To prove a Florida DUI charge, there must be evidence that the person was driving under the influence of alcohol to the extent that his normal faculties were impaired. If the police do not make contact with the DUI suspect within a reasonable amount of time, they will not be able to judge his demeanor and check for “indicators of impairment.” With Florida DUI cases, these “indicators” include bloodshot, watery eyes, odor of an alcoholic beverage on the breath, unsteadiness, slurred speech and more.

As a Jacksonville criminal lawyer, when I see a fact scenario like the one above, I also ask if the driver can be charged with leaving the scene of an accident in Jacksonville FL. It appears that the driver certainly left the area where the accident occurred. The news story only mentioned the damage to the truck. It did not say anything about damage to another’s property. Section 316.063 of the Florida Statutes applies to accidents involving damage to an unattended vehicle or other property. Section 316.063 states:

What if there was no damage to another person’s vehicle or property? What if the only damage is to the defendant’s vehicle? There is case law in Florida that discusses this. In Powell v. State, the Florida 1st District Court of Appeals reversed a leaving the scene of an accident with property conviction because the state failed the prove damage to the property of another. In Powell, court pointed out the Section 316.063(1) of the Florida Statutes that addresses accidents resulting in any damage to such other vehicle or property.  The Florida law “provides that any driver who crashes into and damages an unattended vehicle or property has a duty to notify the owner of that property.”  In Powell, “The only pertinent evidence below was a photograph of the damage to the car appellant was driving, and testimony that he crashed into either a wooden barricade, a steel beam, or a culvert. There was no testimony about any damage to whatever object the vehicle hit, and there may have been none at all.” Powell v. State, 28 So. 3d 958, 958-59 (Fla. 1st DCA 2010)