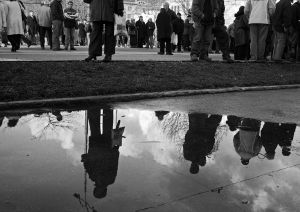 People from all over the nation protest for Alexander

The Florida Stand Your Ground Law has its critics and supporters.  A few criminal cases directed national attention to Florida’s self defense laws.  The George Zimmerman case is probably the most popular.  Zimmerman was found not guilty after being tried for the murder of Trayvon Martin. Governor Rick Scott appointed a special prosecutor to represent the State of Florida in this case.  Although the case did not occur in Jacksonville, Angela Corey, the State Attorney from Duval County, was appointed to the case.  The case was tried by assistant state attorneys from the Duval County office.  Even after the jury rendered a not guilty verdict in the Zimmerman-Martin trial, this was not the last time the media would be focusing on Jacksonville and Florida’s Stand Your Ground and self-defenses laws.

Last February, Michael Dunn was tried for the murder of Jordan Davis and attempted murder of three other teenagers in Jacksonville.  Dunn argued that he acted in self-defense when shooting at the teenagers.  He was found guilty of the attempted murders, but the jury could not come to a resolution as to the murder count.  Dunn will be tried again for Davis’ murder (Read New Jacksonville Criminal Defense Attorney for Second Dunn Trial).   Like the Zimmerman-Martin case, the Dunn-Davis case caused people to protest, focusing on the fairness of Florida’s self-defense laws and the Dual County State Attorney’s Office.

Another Jacksonville criminal case that has led to protests centered on self-defense laws is the Marissa Alexander attempted murder case.  This week is a big week for Alexander’s supporters.  First Coast News reported:

“Supporters of Marissa Alexander came from far and wide Monday morning to take one message to the streets of Jacksonville. The mostly peaceful demonstration they held began on the south bank at the Crowne Plaza hotel, stretched across the Main Street Bridge and ended on the front lawn of the Duval County Courthouse…. [Alexander] has become the center of an international grassroots movement that’s taken particular issue with what participants call unjust gender violence and the mass incarceration of minorities…. The movement, which identifies itself as a conglomerate of non-profits aimed at supporting civil rights, is converging upon the River City for ‘Stand Your Ground’ week. Currently in its fourth day, people are in attendance from as far away as Los Angeles, New York and Denver.”

While most Jacksonville criminal lawyers are familiar with the Alexander case, other residents are not.  The facts are as follows:

“In 2012, Alexander, 33, was convicted of firing a shot at her husband and his two children. But, an appellate court later overturned that conviction, and now the Jacksonville mother is facing 60 years in prison when she is retried in December. Currently, Alexander is confined to home detention and facing three counts of aggravated assault with a deadly weapon charges…. Alexander and her supporters have long maintained she fired the shot in self-defense and should be immune from prosecution under Florida’s ‘Stand Your Ground’ law. But, prosecutors have argued she didn’t need to pick up the gun. Alexander was recently denied a second opportunity to have a ‘Stand Your Ground’ hearing with the judge in the case citing a lack of new evidence.”

With the Dunn and Alexander cases preparing for new trials, this will be an interesting year for Duval County and the Jacksonville criminal justice system.