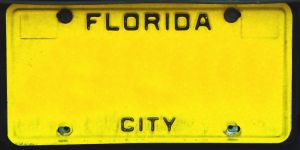 Is your tag legal?

A Florida criminal lawyer recently sent an article to me about another Florida traffic law that would allow a police officer to pull you over.   While I was familiar with the law, it crossed my mind that this law could be used as a way for police officers to stop a vehicle.  If you are stopped and police suspect illegal activity, they may be able to detain you.  A Tampa news station wrote a story about the decorative brackets for license plate tags.  The story stated:

“The brackets, advertising dealerships, universities, or just there to spice up the look of the plate, are all over Tampa Bay roadways. But some drivers are finding out they’re illegal. If the bracket covers any of the words on the plate, including myFlorida.com or Sunshine State, it’s illegal and you could be pulled over for the violation by law enforcement. The ticket is over $100. Law enforcement doesn’t track this specific violation, but court records show the statute used to cite this type of ticket was used in Tampa Bay more than 2,000 times last year.” (wfla.com)

It appears that there are plenty of people on Florida’s highways and streets of Jacksonville violating this traffic law.  In fact, “8 On Your Side asked Gaskins to check out photos of plates from around the area. Even some of News Channel 8 vehicles had illegal brackets. A quick drop by Tampa City Hall showed every car in the lot had a bad bracket.”  While many people are violating the law, it will not stop police from pulling you over.  If your license plate tag does not comply with the law, the police are legally able to stop you.  The law that applies to license plate tags is Florida Statute 316.605:

(1) Every vehicle, at all times while driven, stopped, or parked upon any highways, roads, or streets of this state, shall be licensed in the name of the owner thereof in accordance with the laws of this state unless such vehicle is not required by the laws of this state to be licensed in this state and shall, except as otherwise provided in s. 320.0706 for front-end registration license plates on truck tractors and s. 320.086(5) which exempts display of license plates on described former military vehicles, display the license plate or both of the license plates assigned to it by the state, one on the rear and, if two, the other on the front of the vehicle, each to be securely fastened to the vehicle outside the main body of the vehicle not higher than 60 inches and not lower than 12 inches from the ground and no more than 24 inches to the left or right of the centerline of the vehicle, and in such manner as to prevent the plates from swinging, and all letters, numerals, printing, writing, and other identification marks upon the plates regarding the word “Florida,” the registration decal, and the alphanumeric designation shall be clear and distinct and free from defacement, mutilation, grease, and other obscuring matter, so that they will be plainly visible and legible at all times 100 feet from the rear or front. Except as provided in s. 316.2085(3), vehicle license plates shall be affixed and displayed in such a manner that the letters and numerals shall be read from left to right parallel to the ground. No vehicle license plate may be displayed in an inverted or reversed position or in such a manner that the letters and numbers and their proper sequence are not readily identifiable. Nothing shall be placed upon the face of a Florida plate except as permitted by law or by rule or regulation of a governmental agency….