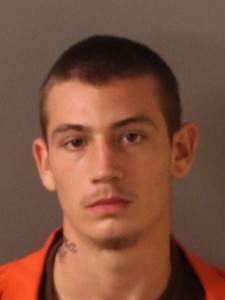 A high-speed car chase spanning over two Northeast Florida counties led to the arrest of a teenager.  Joseph Jacob Macquarrie is facing charges for what started off as a traffic stop.  He will be facing charges as an adult and not a Jacksonville juvenile criminal defendant, because he is no longer a minor as he is 18-years-old.  He will also be facing charges in two different counties due to the fact that he is accused of committing crimes in each county.  First Coast News of Jacksonville reported, “The Baker County Sheriff’s Office responded to reports of a reckless driver and met up with the suspect vehicle, a 2004 black Mitsubishi Endeavor, in the 100 block of West Macclenny Avenue (U.S. 90), according to a police report from the Baker County Sheriff’s Office.”

Baker County police stated that “the SUV had a faulty break light and responding deputies conducted a traffic stop.”  When police made contact with the driver, he “allegedly told police he forgot his wallet and said his name was ‘Mathew Hodges.’”  The deputies asked him to step outside of the vehicle.  Instead, he drove off and headed to Jacksonville FL.  “The deputies got back into their patrol car and gave chase with lights and sirens.”  First Coast News stated:

“The BCSO called for assistance from the Florida Highway Patrol and the Jacksonville Sheriff’s Office when the chase crossed the county line, according to Sgt. Dylan Bryan with FHP.  FHP performed a PIT maneuver on Hammond Boulevard in Jacksonville stopping the suspect’s vehicle. The suspect got out of his vehicle and ran, but was caught by an FHP K-9 officer. The suspect was treated on scene for minor injuries received form the K-9 and was transported to jail.”

According to the story, this case started off as a traffic stop.  Now, “Macquarrie is facing charges of fleeing/eluding, non-moving traffic violation, aggravated assault and resisting officer in Baker County.”  Fleeing and attempting to elude a law enforcement officer is a felony in Florida.  Florida aggravated assault is also a felony.  Because Macquarrie left Baker County and entered Duval County, he “is facing additional charges in Jacksonville.”  He was arrested for resisting an officer in Jacksonville.  He was also arrested for Jacksonville reckless driving and no driver’s license.  It appears that police must have found drugs in the vehicle or on Macquarrie, because he was also arrested for possession of a controlled substance and possession of drug paraphernalia in Jacksonville.  The felony charges do not end there in Duval County.  He has was booked in the Duval County jail on other felony charges such as “aggravated assault on law enforcement officer, fleeing/attempting to elude law enforcement after crash and fleeing or attempting to allude law enforcement high speed.”

While Macquarrie has been arrested for these crimes, it does not mean that he will be formally charged with all of them.  The state attorney is the one that makes the charging decision.  There may be certain charges that he has been accused of but did not commit.  This is something that his Jacksonville criminal lawyer will go through with him when building a defense and/or working out a plea deal.