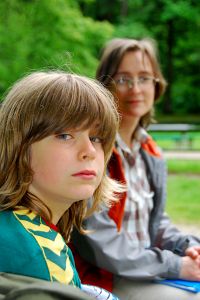 Children need their parents help, especially when they are in trouble.

Last week, I wrote a couple of articles about a problem that occurred on Christmas Day at a north side movie theater and shopping center.  One article was entitled Fighting and Resisting Officer Charges in Jacksonville FL and can be found on the Jacksonville lawyers website.  The other is called Teens Arrested in Jacksonville Appear in Duval County Court and is on this Jacksonville criminal defense lawyers website.  Five people were arrested in conjunction with fights that broke out at the Regal River City Marketplace theater. “Police said a group of young people tried to get inside the movie theater without paying and the commotion led to a fight involving 600 young adults. More than 60 police officers responded.”  Police arrested two adults and three juveniles.

In an effort to prevent future violence, “local leaders and residents met Friday morning to discuss what the Jacksonville Sheriff’s Office called a melee at the Hollywood Theater in River City Marketplace on Christmas Day…. City Commissioner Cherlyn Williams released a statement that said, in part, ‘What was reported to have occurred at Hollywood Theaters is not representative of our young people, our culture or our community.’ Williams, school board member Paula Wright and city councilman Johnny Gaffney have developed a plan to try and ensure something like this does not happen again. According to the news release, the plan focuses on respect, restraint and responsibility.” (News4jax.com)

Jacksonville community leaders want to work to help the community’s juveniles.  Gaffney stated, “These are our children. So we are working for one cause one mission, one vision, one objective.”  The group wants to communicate with teenagers on different levels.  They want “to first start a website as a way to communicate with young adults and listen to their concerns and suggestions.”  They will also be visiting local high schools.  “At those meetings teenagers can also provide suggestions for avoiding any future violence.”

“The group wants to find a way to increase parental and community involvement.”  As a Jacksonville juvenile attorney, I agree that parental involvement is key.  When I am representing a child, it makes a huge difference when the parents are supportive.  Children and teenagers will make mistakes.  If your child has been arrested, he or she is scared.  It is important to talk to your child and actively listen.  Talking to a Jacksonville criminal lawyer with experience representing juveniles is key.  You want someone that will look out for your child’s best interests.  Contact 20 Miles Law to speak with a Jacksonville juvenile criminal attorney about the case.  You may call 904-564-2525 to speak with a Jacksonville lawyer about representing your child.  You want someone that your child will feel comfortable opening up to, so have your son or daughter talk to the attorney to see how he or she feels about the representation.