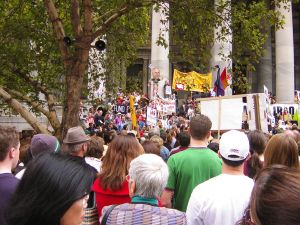 Protests in Jacksonville FL on Oct. 22

The majority of the time, a protest is a peaceful demonstration.  If the protest gets out of hand, it may result in violence.  For instance, Jacksonville fighting and affray charges may arise if two groups become violent with each other.  You may also find people being arrested for Jacksonville battery or assault charges. We have seen instances on the news where police have been violent with peaceful protestors that are exercising their first amendment rights.  I have represented people that were arrested for Jacksonville disorderly conduct for merely voicing their opinions.  I have seen people arrested for breach of the peace for otherwise constitutionally protected activities.

Today is the 18th Annual National Day of Protest.  It is important to remember you rights today.  People may be arrested during protests.  Demonstrators need to understand that they should talk to an experienced Jacksonville criminal defense attorney if they are arrested.  The National Day of Protest “began after conversations between activists about what they called an ‘intensifying nationwide epidemic of police brutality.'”  The 1st National Day of Protest was in 1996.  Over 40 cities in the United States participated in the event.  The protests now include even more cities.  The National protest still “maintains the same goal of highlighting what supporters say is police brutality and criminalization of a generation.” There will be a protest in downtown Jacksonville.  It will be from 4:00 to 6:00 p.m. in Hemming Plaza.

The Jacksonville protest appears to focus on the Florida George Zimmerman/Trayvon Martin shooting.  It is also drawing attention to the allegations against Michael Dunn in the Jordan Davis murder case.  Michael Dunn is set to appear in court on Thursday just a few blocks from where the demonstration is taking place.