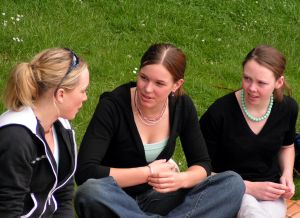 Yesterday, almost 100 people attended “an event focused on the incarceration of juvenile girls” in Jacksonville FL.  The event “featured presentations from child advocates, a panel discussion and a reflection of the life experience of Biannela Susana, mother of Cristian Fernandez.”  “The event was sponsored by the Weaver policy center, which focuses on girls, a statewide group called Voices for Florida Girls and The Children’s Campaign.”  It drew attention to the fact that Jacksonville jails more teenage girls than other big cities in Florida.  On of the reasons for the large amount of juvenile girls incarcerated is “because of a lack of diversion efforts and a ‘get tough’ culture and attitude toward juveniles, said leaders of a policy group focused on girls’ needs.”

Lawanda Ravoira is the president and CEO of the Delores Barr Weaver Policy Center. She spoke to Wednesday night’s crowd about Susana.  Duval County Circuit Court Judge Daniel recently sentenced Susana to a ten year prison sentence.  Her sentence was suspended so long as she complied with the terms of her probation. Read Cristian Fernandez Mother on Probation in Jacksonville FL for more details about the sentencing hearing.  Raviora explained that “Susana would be taking her college placement test and will begin working for the Weaver policy center full time in November.”  Those attending the event to support the juvenile girls incarcerated in Jacksonville applauded when hearing the news about Susana.

The 4th Judicial Circuit of Northeast Florida covers Duval, Nassau, and Clay County.  The “4th Circuit leads the state in the number of incarcerated girls in the most recent year, according to state figures.”  When it comes to young girls in jail in the Jacksonville area, we have more incarcerated girls between the ages 10-17 than Miami-Dade, Hillsborough and Broward combined.  As a Jacksonville juvenile lawyer, this concerns me.  Why do we have more girls in jail that the rest of Florida?  The Florida Times Union reported:

“Officials with the Weaver policy center said programs in Miami and Tampa are designed to help juveniles and their families engage in alternatives to incarceration.  For example, a Miami program works to assess the needs of girls, whereas a similar program in Jacksonville is underfunded and only assesses a juvenile’s risk to re-offend instead of exploring root causes.”

Other counties in Florida are better equipped to deal with juvenile mental health issues.  “In Tampa there is a mental health court to help with juvenile cases, said Ravoira, but Jacksonville doesn’t have such a court.”  Ravoira went on to add, “If there’s a person who needs mental health services [in Tampa] those services are available right in the courtroom…. So we don’t have the diversion services or the treatment services that’s needed to provide the interventions that’s needed for the girls in this community.”  The Jacksonville juvenile delinquent court does have a diversion program through the state attorney’s office.  However, the juvenile must first be accepted to the program.  Also, the Duval County program does not give mental health services in the courtroom.

So what is the reason that Jacksonville is lacking in juvenile rehabilitation?  According to advocates for the Weaver policy center, “Some of the reason for the disparity between Jacksonville and other cities is Northeast Florida’s attitude toward juveniles.”  Vanessa Patino Lydia is the policy center’s director of research and planning.  She stated that the reason for the disparity is that “It is political, it’s more of a get-tough approach.”  There is also a lack of funding for programs for juveniles in Jacksonville.

The Weaver policy center is working on several measures to help teenage girls in Jacksonville.  It is trying “to develop its legislative platform which will include an effort to fund more juvenile probation officers in Duval, Clay and Nassau counties.”  It “will also be providing gender-responsive training to all probation officers in the three counties. The training is planned for later this year or early 2014.”

The Weaver policy center will also take a hands-on approach.  It “plans to soon begin working with the local juvenile detention center to review policies and practices to see how responsive they are for girls. After the review the policy center will develop a plan of action.”  It will also be interviewing “every girl from five counties in the First Coast who is incarcerated. The interviews will seek detailed information about each girl’s pathway to incarceration, their recommendations for improving the system and what their ambitions are after they are released.”

Usually when a juvenile comes to my Jacksonville law office, the girl arrives with her parents.  As a Jacksonville lawyer that has represented many children and teenagers, I know that I need the support of the parents or this will never work.  Many of the girls that the Weaver policy center is protecting do not have parents involved in their lives.  Some of the girls are young mothers themselves.  It appears that the Weaver Policy Center is trying to deal with this problem and overcome the lack of parenting.