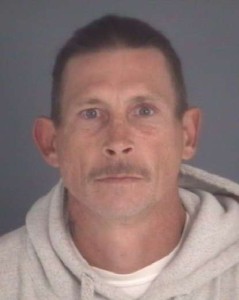 The Clay County Sheriff’s Office received a telephone call about a vandalism in Middleburg FL exactly one week ago.  Last Friday, the Clay County Sheriff’s Office arrested Anthonio Joseph Casanova.  He was arrested for Florida criminal mischief due to the vandalism of a house in Clay County.  Casanova is 44-years-old and resides in Middleburg.  Police have accused him of “spray painting Aryan nation graffiti and other comments on a home where Detective David White died during a drug raid in February 2012.”

Ted Arthur Tiley “fatally shot White and wounded partner Matthew Hanlin” in the house located at 4874 Alligator Boulevard in Middleburg FL.  Tiley was shot during the altercation.  Casanova has been accused of vandalizing the house and writing messages all over the house, “including a rest in peace epitaph for Ted Arthur Tilley…. Other markings included swastikas and symbols for the World War II era Nazi SS.”  The house is now vacant.

Casanova was arrested for a felony criminal mischief, because the extent of the damage to the property was $1000 or more.  His bail was set at $25,000, but “he posted his required bond and has been released from jail.”  Criminal mischief is defined in Florida Statute Section 806.13.  It states:

4. If the person has one or more previous convictions for violating this subsection, the offense under subparagraph 1. or subparagraph 2. for which the person is charged shall be reclassified as a felony of the third degree, punishable as provided in s. 775.082, s. 775.083, or s. 775.084.

It appears that “off-duty county firemen painted over the damage using supplies funded by the local fire union.”  Casanova will still be facing serious charges.  He has a FL criminal record that will be used against him.  There is a good chance that the Clay County State Attorney’s Office will seek jail or prison time.  He will need to start working on his defense.  If he does go to trial on this case, I believe that it is questionable as to whether he will receive a fair trial in Clay County.