When you are a Jacksonville criminal lawyer, it is not usual to reject a plea deal and prepare for trial.  If the Jacksonville defense lawyer and the state attorney do not negotiate a settlement agreement and the case is not dropped, the case will go to trial.  The trial could be in front of a judge or jury.  Whether a judge or the jury will decide guilt or innocence depends on the type of criminal case you have.  For example, Jacksonville juvenile delinquent cases are tried before a judge.  Most adult cases go before a jury, but this is not always the case with certain misdemeanor charges.

When a Jacksonville criminal attorney is accepting or rejecting plea bargains from the state attorney, it is normally on behalf of their clients.  The clients tell the attorney whether to accept or reject.  The attorney does not actually make the decision herself.  She only gives advice and explains the pros and the cons under the circumstances.  A prominent Jacksonville lawyer has recently found himself out of the lawyer’s seat and in the criminal defendant’s chair.  According to Florida prosecutor Nick Cos, Kelly Mathis is “ a lawyer and he gamed the legal system.” 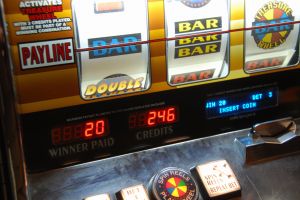 Opening statements began last Thursday in Kelly Mathis’ criminal case.  “Mathis was one of 57 people arrested in March after a series of raids that spanned several counties.”  Mathis and his co-defendants were the allied veterans’ charity and Internet cafés as a font for illegal gambling. State Attorney “Cox said it was Mathis’ idea to bring together a gaming company and a veterans charity to skirt state laws by allowing gambling in Internet cafes…. Cox said if customers ‘ever said the term bet, try would be corrected. And they would say no, no, no. It was a reveal.’”

Mathis’ defense attorney rebutted the allegations in his opening statement.  He “said they were corrected because they weren’t making a bet. Customers at the Internet cafes were buying Internet time. They were participating in a sweepstakes, a contest to promote their business. ‘Like the Pepsi bottle cap. Like the McDonald’s Monopoly, Like Publishers Clearing House.’” The defense argues that Mathis was merely doing his job.  He “was hired to find out if the games being played at the Internet cafes were legal. He said Mathis had done extensive research for years to make sure the cafes followed the letter of the law. The problem is, state and local agencies can’t agree on what the law actually says.”  It appears that the Florida Attorney General issued an opinion on this subject matter.  “The attorney general opinion did not say this is illegal. The attorney general opinion said we don’t know.”  In an article on Jacksonville lawyers website called Possible Witnesses in Jacksonville Lawyer’s Criminal Trial, I stated that Florida’s attorney general Pam Bondi was listed as a defense witness.  This explains why she was on the witness list.  Based on the opening statement, it seems as if the defense plans on calling Bondi as a witness.

Mathis has been accused of being the mastermind in the Allied Veterans scandal, but the jury will be making the decision: “Is Kelly Mathis the mastermind behind a $300 million gambling scam? Or a good lawyer just doing his job?”

Former Allied Vets Cmdr. Jerry Bass negotiated a plea deal.  He “pleaded no contest to two felony counts of operating a lottery. Nearly 200 other charges were dropped. In exchange for the plea, he will serve no prison time and no probation. He will have to pay court costs and fines….Mathis has refused to take a deal. He says he’s confident a jury will find him not guilty.”  Action News of Jacksonville made a very good point about this case.  It is important to note, “Only a fraction of the millions made actually went to the veterans. It’s not an issue at the trial. No one is charged with shortchanging the charity. This is about illegal gambling.”