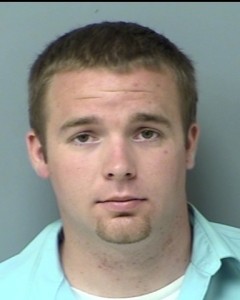 Schmidt sentenced to 15 months in prison for stealing.

Andrew Michael Schmidt was arrested in St. Johns County Florida on January 3, 2013.  The “St. Johns County Sheriff’s deputies suspected him of stealing jewelry, silver coins and bars and money from an 82-year-old resident” at Glenmoor Retirement Community.  According to the St. Augustine Record, “Other residents of Glenmoor, where Schmidt was working as a security guard, reported similar thefts.”

Glenmoor Retirement Community is a very prestigious retirement living facility in St. Augustine FL.  It is located in the World Golf Village.  As with most retirement communities, Glenmoor has a staff that ranges from nurses and caregivers to maintenance and security.  When a person is employed in a retirement community or assisted living facility, they are often in a position of trust.  Due to the nature of the living arrangements, the staff must be able to get in out of the residents’ apartments and homes.

Schmidt was a security guard at Glenmoor.  He was accused of stealing from the elderly residents.  St. Johns County police arrested him for exploitation of the elderly and Florida burglary.  He was also arrested for Florida dealing in stolen property, grand theft, and giving false verification of ownership.  He was released from jail on a bond a few of days after his arrest.  The St Johns County State Attorneys Office filed charges on January 25.  The State of Florida did not file charges for exploitation of the elderly.  The State did file four criminal counts.  Schmidt was charged with Florida grand theft under Florida Statute Section 812.014(2)(C)(1).  This is a 3rd degree felony.  He was charged with dealing in stolen property pursuant to Section 812.019(1).  This is a 2nd degree felony.  He was also charge with burglary to an unoccupied dwelling under Section 810.02(3)(B) and false verification of ownership to a second hand dealer identified in Section 538.04(4)(B).  The burglary and false verification chargers are 2nd degree felonies.

Schmidt entered into a plea deal which was accepted by Judge Traynor in court yesterday.  He entered a plea of nolo contendere to the burglary and dealing in stolen property charges.  A nolo contendere plea is also known as pleading no contest.  He was sentenced to 15 months in the Florida State Prison.  He was given credit for the 4 days that he served in jail in January.  After that, he will serve 2 years on probation, and he will pay restitution for the stolen property.  He received concurrent sentences for both counts.  If he violates his probation, he will go before Judge Traynor again and could go back to prison for a violation of probation in Florida.  The State Attorneys Office dropped the grand theft and false verification of ownership counts.

Schmidt was convicted of these crimes.  He will not be able to seal his Florida criminal record because he was adjudicated guilty.  Since his charges were not dropped, he will not be able to expunge his Florida record either.  The problem with this is that when he is released from prison, he will likely try to get a job.  With a Florida theft crime on his record, he will have a hard time finding someone that will want to hire him after conducting a Florida criminal background check.  He is also a convicted felon now.