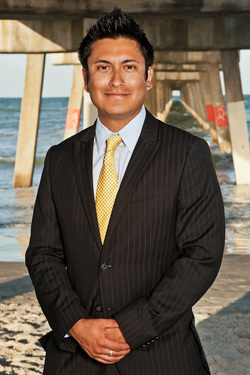 Fernando Meza is a resident of Jacksonville Beach FL.  He lives and works in Jacksonville Beach.  He was a city council candidate last year that was supported by many residents.  Although he was back by so many, he lost the election.  Still feeling a strong attachment and obligation to his city, he held a residents meeting last week to discuss the brawls that occurred on Memorial Day.  Meza and Jacksonville Beach residents and business owners came together to come up with ideas to make the beach a safer place.  Meza “pleaded for more police officers and stronger enforcement of laws, including noise and litter ordinances. He also suggested signs on the beach to encourage people to report suspicious activity.”  The Florida Times Union reported the story.  Meza stated, “We as a community will not tolerate this behavior…. I will not give up and we as a community will not give up to make this a better city and a better place to live.”

Yesterday, approximately 150 people descended on City Hall “to demand more protection for their homes, businesses and beach after Memorial Day brawls left this nervous, tourism-reliant city with a black eye…. The council took the crowd’s suggestions under advisement and made no decisions.”  People are worried about what may occur at during the 4th of July festivities.  The fireworks display was canceled in 2012 “after unruly crowds leaving the event in 2011 caused trouble for police.  Latham pushed for a renewal of the celebration as part of his effort to return a family- and business-friendly environment to the beach. The council voted to renew the fireworks celebration against the recommendation of Forbes, who expressed concerns about public safety.  [Police Chief] Dooley has promised to have extra patrols on the Fourth of July through mutual-aid agreements with the Jacksonville Sheriff’s Office and other departments.”

I posted an article on 20 Miles Law Jacksonville Criminal Defense Lawyers website about this. Read Battery and Fighting in Jacksonville Beach Memorial Day Brawl for the entire article. The fireworks display will be back in Jacksonville Beach this year.  There are numerous charges that may occur on this extended weekend.  Without the brawls, there are usually alcohol related offenses.  Jacksonville possession of alcohol by a minor is one charge that comes to mind, because teens and college students may be drinking on the beach.  People will likely be arrested for Jacksonville disorderly conduct or intoxication.  Even if the police arrest records show more arrests like these, this does not mean the beach is safer.  As a Jacksonville criminal lawyer, I have seen people acquire Florida criminal records over victimless crimes.  The concern for 4th of July weekend is to curtail violence.  Police will hopefully be keeping an eye out for suspicious, gang-like activity and watching out for verbal altercations that may escalate into fighting in Jacksonville Beach.  Sometimes, the presence of a police officer can stop a Jacksonville battery from occurring.

Jax Beach business owners should also increase their security and staff for the 4th of July weekend.  We have seen the First and Second Video of Jacksonville Beach Florida Memorial Day Fights.  The appeared to be Florida juveniles and adults involved.  As a Jacksonville criminal attorney, I can safely assume that Jacksonville assault and battery were not the only crimes that occurred on Memorial Day.  The brawls were so bad that stores and restaurants had to shut down.  With the large crowds in the area, I would not be surprised to learn that Jacksonville thefts were also a problem that day.

Jacksonville Beach Police Chief Pat Dooley informed residents that “several changes in street use and parking are being considered to cut down on cruising and other problems. That includes potentially closing the heavily used area of First Street between Beach Boulevard and Fourth Street North on Friday evenings and all day Saturday, Sunday and holidays.”  Police are still looking for the suspects that were involved in the Memorial Day brawls.  “Dooley said the fights involved 10 to 15 people from Jacksonville, but didn’t say if any have been identified.”

Go to Jacksonville.com for more on this story.