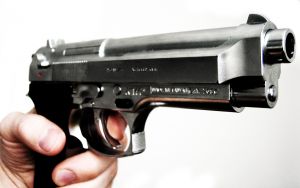 Self Defense or Murder? Guilty or Not Guilty?

Two days ago, a reporter called me from Newsweek.  Christine Pelisek from the Daily Beast asked me to comment on the opening statements of the Trayvon Martin and George Zimmerman second degree murder trail.  She wanted to speak with a Florida criminal lawyer that had been following the case.  I believe that she may have read a few articles on this Jacksonville criminal defense lawyers and the Jacksonville lawyers website.  I am in no way an expert on the subject matter, but as a Jacksonville criminal lawyer, I cannot help but be intrigued by this case and talk about it.  Initially, I was interested in the case, because it involves Florida’s self defense laws.  In particular, the Florida stand your ground law has been discussed all over television by lawyers in various states.  Just like most people, I was also interested due to protests that were occurring nationwide.  My interest level peaked when Jacksonville became involved in a central Florida case.  Angela Corey, the Duval County State Attorney, was appointed by the governor to make a decision as to whether or not Zimmerman would be prosecuted for shooting and killing Martin (Read Duval County State Attorney to Prosecute Jacksonville Stand Your Ground Case).  This would interest any Jacksonville criminal attorney, because Corey is the head of the office that prosecutes cases that we defend, and we work with her assistant state attorneys on a regular basis.

I try to watch the trial as much as I can, but I must still run my Jacksonville law office, so I tend to miss some of it.  I am very happy that I was able to watch a significant portion of the trial today.  Today, John Good testified.  He was a resident of the neighborhood where Zimmerman shot Martin.  It appears that, out of all of the witnesses thus far, Good saw more of the altercation that other witnesses and neighbors.  Fox News summarized Good’s testimony:

“John Good said he was watching TV with his wife when they heard a noise and he went out to investigate, despite his wife warning him not to. At first, he thought a dog might be attacking someone, but as he moved closer, he said he observed what looked like ‘a tussle’ between two people.  ‘It looked like a tussle…. I could only see one person. At one point, I yelled out, What’s going on? Stop it,’ I believe.”

Bernie de la Rionda is the Duval County Assistant State Attorney that led the direct examination of Good.  Good “said one of the combatants was straddling a man lying face up on the pavement, and throwing punches. The testimony appeared to corroborate Zimmerman’s claims that he shot the 17-year-old African-American with a legally registered gun in self defense, as he was being pummeled.”  Unlike the other witnesses that the prosecution called, Good seemed more like a defense witness.  I do not mean that he seemed to side with the defense or have a bias in favor of the defense.  I mean that his testimony was extremely favorable to Zimmerman.  He said, “I could tell that the person on the bottom had a lighter skin color.”   He said that the person on the bottom was wearing white or red and the person on top was wearing a darker color.   Zimmerman had on a red jacket that night, corroborating his claim that he was attacked by Martin and acting in self defense.  It should be noted that “Good said he did not see the person on top slam the other one’s head into the pavement. Zimmerman had wounds to his scalp following the confrontation.”  Good went inside his house during the confrontation to call 911.

As I stated in the beginning, I was interviewed by a reported about the case.  After opening statements, I was wondering how the defense was going to get Zimmerman’s side of the story in.  I told her that if the prosecution’s case goes the way that they said it would in opening statements, there is a good chance Zimmerman would have to testify.  However, if the state cannot prove the case, he is not taking the stand.  This is only my opinion, and we have not heard all of the witnesses.  The prosecution still has much more evidence to present.  As a Duval County attorney, I can vouch that Bernie de la Rionda, John Guy, and Rich Mantei are very good trial attorneys.  Still, at this time, I feel like the Zimmerman does not need to testify.  Remember, the defense does not need to prove innocence.  The State of Florida must prove that he is guilty beyond a reasonable doubt.