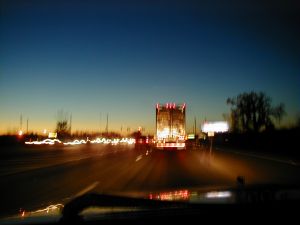 A woman was injured late Sunday night after being involved in a Jacksonville hit and run car accident.  She is being treated for serious injuries. According to Action News Jax, she “is under medical sedation tonight and fighting for her life.”  The car accident occurred on J Turner Bulter Blvd near Kernan Blvd.  This is known as JTB.  It is highway that runs from Phillips Hwy to A1A.  It is a heavily used highway in the area, because it takes people from the south side of Jacksonville to the beaches.

The car accident occurred around 11:15 on Sunday night.  Witnesses to the hit and run car accident stated that “two vehicles were traveling at a high rate of speed, weaving in and out of traffic, possibly racing.”  News4jax reported, “A Volkswagen Beetle struck the right rear of a Toyota Tacoma, and the driver of the pickup lost control and struck the inside concrete barrier wall. The truck then overturned several times, troopers said.”  The cars did not stop after the car crash.  Police are now looking for the two cars.  “They’re searching for a green passenger vehicle and a blue 2008-2010 Volkswagen Beetle with fresh front end damage. Police believe the blue Beetle is the vehicle that slammed into the pickup truck.”  The accident did not end with the initial collision.  After the car accident, “two other cars collided as they approached the wreck in a domino effect that shut down Butler Boulevard for more than three hours.”  (Action News)

The Florida Highway Patrol and Jacksonville Sheriff’s Office are looking for the drivers that are accused of causing the collision.  When there is a car accident of this magnitude, there will be damage to the other vehicle.  The police are going to be looking for this Beetle.  When they find it, they are going to talk to the owner and any possible drivers.  Those people are going to need the representation of a Jacksonville criminal lawyer.  This is not just a Florida speeding ticket or Jacksonville traffic ticket.  This is a serious criminal offense that will required the help of a Jacksonville criminal attorney.  Due to the injuries involved, this hit and run accident will be a felony charge.  A Florida leaving the scene of an accident crime may be a misdemeanor to a felony.  Read Jacksonville Hit and Run Laws After Leaving the Scene of a Crash for more information about leaving the scene of an accident charges and the penalties involved.