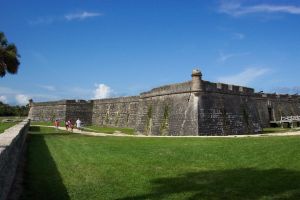 Joseph Anthony Scaglione was arrested for allegedly beating a man.  The incident took place on April 7 on the Bridge of Lions in St. Augustine FL.  Scaglione is 27 years old.  He is a “firefighter at Naval Air Station Mayport.” (Jacksonville News Channel 4).  He “was arrested by Naval Criminal Investigative Service and the Jacksonville Sheriff’s Office while at work at the Mayport Naval Air Station Fire Department.”  (St. Augustine Record)  He was arrested due to a St. Johns County warrant.  Because he was in Duval County and arrested by the Jacksonville Sheriff’s Office, he was taken to the Duval County jail for booking.  The St. Johns County police department will likely be transporting him to St. Johns County to face the criminal charges.  According to the St. Augustine Police Department, “Scaglione was seen stopping his motorcycle on the Bridge of Lions on April 7 and beating a local man while he walked across the bridge. The victim and two witnesses picked Scaglione out of a photo lineup as the person who committed the battery.”

If I were the St. Johns County lawyer on this case, I would want to know a few things immediately.  Who are the witnesses that identified my client?  Do they know my client?  Does the victim know my client?  What kind of procedures where used during the photo identification process?  Did the police officer or detective “suggest” anything to the witnesses?  Why was my client’s photograph used in the photo spread?  Where was my client at the time the battery occurred?  Does he have an alibi?  If he was there, was he acting under Florida’s self defense laws?

There are a variety of unanswered questions.  Based on the article, I do not even know if Scaglione was arrested for Florida simple battery or Florida aggravated battery.  It will likely depend on the injuries sustained.  The reason that this is important is because it is the difference between a felony and misdemeanor crime.