I received my Florida Association of Criminal Defense Lawyers Officer Candidate list this week.  I went through the list of Florida criminal defense lawyers that were up for election.  I saw the name of an attorney that was the perfect candidate to represent the Florida Association of Criminal Defense Lawyers (FACDL).  It was Jim Miller.  He was the best appellate attorney in Northeast Florida.  When people would call my Jacksonville law office looking for an appellate lawyer, I would tell them to call Jim Miller.  He was brilliant, yet down to earth. 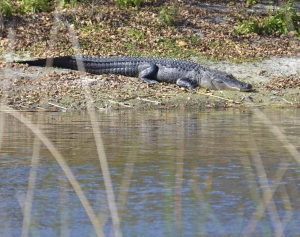 Jim Miller was not only a wonderful attorney. He was also a strong supporter of the Everglades.

It is depressing to speak about Jim Miller in the third person.  He passed away this week.  Jacksonville criminal lawyers received emails earlier this week about the tragic accident.  Attorneys all over the state loved and respected him.  This is why there were so many communications between those in the legal community.  He passed away in a car accident in Brevard County on Monday evening.  He “was traveling Southbound in the outside lane on Interstate 95 near mile marker 160 in Brevard County around 5:50 p.m.” when he crashed (News4jax.com).  “His sport-utility vehicle went off Interstate 95 and struck a barrier around a curve, according to the Florida Highway Patrol.” (Jacksonville Daily Record)

The Jacksonville Daily Record also wrote an article in his honor.  It stated “Mr. Miller was a former assistant public defender, founding member of The Florida Association of Criminal Defense Lawyers and a known advocate for the poor. He also handled many cases that dealt with major constitutional issues.”  Bill White was the former Public Defender in Duval County FL.  He talked about the fact that Miller was so much more than an intelligent and powerful attorney.  “He was really a renaissance man,” White said. “If you thought you were quoting from ‘Macbeth’ and it was really ‘Hamlet,’ he’d correct you.” In later years he found that they didn’t often talk law because Mr. Miller was interested in so many different things, White said. “But he was fearless in the courtroom,” he said. “And one of the best appellate lawyers in the state.”

Judge Charles Cofer also had kind words to say about Jim Miller.  Judge Cofer was also a public defender with Jim Miller and share an office with him.  The Florida Times Union interviewed Judge Cofer and other judges and attorneys.  Judge Cofer stated “[Jim] became what we call an attorney’s attorney,” Cofer said. “Other attorneys would seek him out for advice because they valued his opinion so much.” Even after they’d both moved on, Mr. Miller to private practice and Cofer to the bench, he still tried to do lunch with Mr. Miller as much as possible.  “He was conversant in so many topics,” Cofer said. “There’s a real empty spot in a lot of people’s hearts right now and it’ll be there for a long time.”  His beautiful wife, Carol Miller, survives Mr. Miller.  She is also a respected attorney for the Jacksonville Area Legal Aid.

I have had the pleasure of meeting Jim Miller on several occasions.  He was very down to earth.  Although he was a much more experienced lawyer than I am, he never made me feel that way.  He was friendly and kind.  He will be missed my all Jacksonville lawyers and Florida criminal attorneys.  The FACDL annual meeting will not be the same without him.