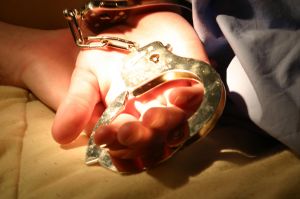 There is no reason to wear handcuffs over a suspended drivers license.

I was looking through the St. Augustine Record.  I noticed a section that caught my eye.  As a Jacksonville criminal lawyer, I should be aware a the types of arrests that are occurring in our area.  I hate when I see people that were arrested for crimes that could have been easily prevented.  The St. Augustine Record has a section for recent arrests.  This gives a jail log for arrests on a certain date.

On February 18, 2013, people were arrested and booked in the St. Johns County jail for a variety of crimes.  Coming off of a three day weekend, I can see that someone would be arrested for Florida driving under the influence DUI.  There were several trespassing charges.  There were several Florida violation of probation warrants executed.  Many were out of county warrants.  Most of the arrests that occurred in St. Johns County FL were misdemeanors.  There were some felonies.  There was a man that was arrested for what was listed as “child cruelty.”  This was likely a Florida child abuse or child neglect charge.  There was an arrest for Florida aggravated assault charges.

As I stated before, there were a lot of misdemeanor arrests.  In particular, there were several arrests for Florida drivers license suspensions.  People were arrested for Florida driving while license suspended or revoked.  I am sure that many of these people were just trying to work or take care of their families.  Instead, they ended up being arrested.  This could have been easily prevented by having a Jacksonville drivers license lawyer help them with their driving record.  Some of these people will end up pleading no contest or guilty without even knowing that they will become Florida habitual traffic offenders.