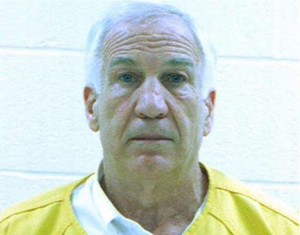 Every State has laws that prohibit sexual abuse of children.  As a Jacksonville criminal lawyer, I have seen all types of child abuse and sexual assault cases.  Jacksonville child abuse charges occur in Florida.  You can open a local newspaper and find arrests for sexual abuse.  However, there is one case that has captured the media all over the nation, the Jerry Sandusky and Penn State child molestation scandal.

Jerry Sandusky is a former assistant coach for the Penn State football team.  He is going to his sentencing hearing today.  If he were being sentenced in Duval County, I am sure that his Jacksonville lawyer would try to do anything that she could to help him.  Still, he would likely serve the rest of his life in prison due to his multiple convictions.  Judge John Cleland will determine his sentence for 45 counts of child sexual abuse.  Over three months ago, Sandusky was accused and convicted by a jury for sexually abusing young boys while in his position as a football coach at Penn State.  He is 68-years-old.  The victims are now adults.

At his criminal jury trial:

“Sandusky, the jury determined, had abused 10 young boys, all of them from disadvantaged homes. Sandusky used his connections to the Penn State football program, as well as his own charity for disadvantaged youth, the Second Mile, to identify potential victims, get close to them and then sexually violate them.”  (New York Times)

Although Sandusky was the person accused of physically committing the child sex abuse acts, these sexual abuse accusations have affected the Penn State and many of those affiliated with it.   His “crimes have exacted a tremendous toll on Penn State. Within days of the grand jury indictment of Sandusky being made public in November 2011, Joe Paterno, the football team’s famed head coach and a patriarchal figure at the university, was fired. He had been alerted to at least one of Sandusky’s attacks on a boy.”  Patero died of cancer in 2012.

Graham B. Spanier, Penn State’s president, “was also dismissed, and the Penn State community found itself confronting the idea that it had placed the interests of its football team above concern for at-risk children.”  Like Spanier and Paterno, it appears that Gary Schultz, the former university vice president, and the athletic director, Tim Curley, “disregarded the welfare of Sandusky’s victims.”  Schultz and Curley are also facing criminal charges.  They are being charged with failing to report the sexual abuse and perjury.  They will go to trial in January for their criminal charges.

The university was fined $60 million by the N.C.A.A.  In addition to the fine, they “imposed a four-year postseason ban and a hefty scholarship reduction on the football team. It also vacated all football victories since 1998, when the sexual assaults documented in the grand jury indictment against Sandusky were believed to have begun. That means that Paterno now longer has the most career coaching victories in major college football.”

Civil lawsuits have arisen out of these child sex abuse allegations. Penn State is being sued by four of the victims.  The New York Times further reported:

“Mike McQueary, the former assistant coach who testified to seeing Sandusky sexually abuse a boy in the shower on Penn State’s campus in 2001, sued the university last week for misrepresentation and defamation, saying the university had mistreated him since Sandusky’s actions became public. McQueary had reported the incident to Paterno, who was faulted for not responding aggressively, and other Penn State officials.”