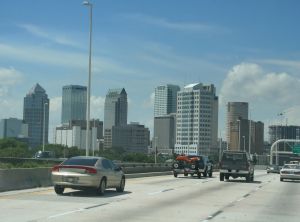 Sex on the interstate results in arrest for aggravated assault with a firearm and indecent exposure in Nassau County, FL.

It looks like a couple in Nassau County is in need of a Nassau County lawyer to defend them for several criminal charges.  On Sunday, a man and woman were arrested for Florida aggravated assault with a firearm and indecent exposure.  Ernest Felix Gonzales was driving down I-95 near Jacksonville, Florida.  The couple,  Ernest Felix Gonzales and Suzanne Welker, are from Fernandina Beach.  Another driver, Louis Carr, witnessed the couple engaging in sexual acts.  The Florida Times Union reported:

“Around 3 p.m. Sunday near the Nassau County line, a man and woman engaged in a sex act were spotted from the another lane. Then the woman, who the report said was ‘naked and could be seen clearly by everyone in the area,’ started to climb into the driver’s lap.  Louis Carr, 24, told deputies the driver, later identified as Gonzales, slowed down as soon as he realized people were watching. He got behind Carr’s pickup and began tailgating and trying to pass.  Carr told deputies that as he drove to his father’s restaurant and bar on U.S. 17 in Yulee, Gonzales tried to run him off the road and into a guardrail.  When Carr pulled into the parking lot, an angry Gonzales jumped out of the sport utility vehicle and Welker got out with a gun at her side. When a woman at the business told Welker they didn’t want a gun there, it was pointed at her, the report said.  When the witnesses told Gonzales and Welker they were calling police, the couple got in their vehicle and left.  They were found at their residence in the 3900 block of First Avenue in Fernandina Beach and arrested. The vehicle and a handgun found in the glovebox were seized.”

Gonzales and Welker are facing serious criminal charges.  Florida aggravated assault with a firearm carries a three-year minimum mandatory sentence under Florida’s 10-20-Life laws.   With a charge like assault and other Jacksonville gun charges, the Jacksonville criminal defense attorney on the case must be proactive and investigate the case.  This could also lead to a suspended Florida drivers license, so consulting with a Jacksonville drivers license lawyer is important.  If you have been arrested in Northeast Florida, talk to a Jacksonville lawyer by calling (904) 564-2525.