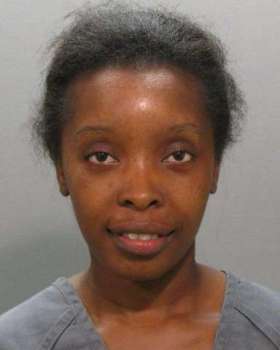 Shameka Curry arrested in Jacksonville for Resisting an Officer Without Violence.

The Landon Imperial Apartment complex is located at 1913 Art Museum Drive in Jacksonville, Florida.  Last night, the manager of the apartment complex called police due to someone trespassing on the property.  The Jacksonville Sheriff’s Office reported to the scene due to the call.  The manager told the police that there have been many people trespassing on the property.  They are from a local home in the area.

The police officer reported that the manager “requested that [the officer] trespass a child that was on the property… The child appeared to be 4 – 5 years of age.”  Obviously, there was no reason to arrest the child as a Jacksonville juvenile delinquent or on criminal trespass charges.  That would be ridiculous.  The officer informed the small child that he was not allowed to be on the property.

The police officer wrote in his report, “at the time I made contact with the child, his mother, Shameka Curry was not with him… While speaking with the child, Shameka came in between me and the child, pushing the child in the chest, and telling me that I did not have any right to speak to her child.”

The Florida Times Union reported on this incident: “Curry refused to identify the child and became aggressive towards the officer.”  The police officer arrested Curry for resisting an officer without violence in Jacksonville.  Her arrest was based on her “extreme aggressive behavior and refusal to identify the child.” The police report does not state where the child was taken, since the mother was arrested and went to the Duval County Jail.  Naturally, Curry was given a Jacksonville trespass warning.  Strangely, the child was also given a trespass warning for this Duval County apartment complex.

I have been a Criminal Lawyer in Duval County for years.  Curry should not plead guilty to resisting an officer without violence in first appearance court.  Her Jacksonville Criminal Defense Attorney needs to investigate the case.  She may have a defense against these charges. Was the police officer lawfully executing a legal duty?  Perhaps.  Was he investigating a possible Jacksonville child neglect case?  Were his actions within the scope of his trespass investigation?  Maybe.  This is why a Jacksonville lawyer must look into the case and the Florida law which applies to it.

The Florida Law for resisting an officer without violence is set forth in Section 843.02 of the Florida Statutes.  This Florida law states:

“Whoever shall resist, obstruct, or oppose any officer as defined in s. 943.10(1), (2), (3), (6), (7), (8), or (9); member of the Parole Commission or any administrative aide or supervisor employed by the commission; county probation officer; parole and probation supervisor; personnel or representative of the Department of Law Enforcement; or other person legally authorized to execute process in the execution of legal process or in the lawful execution of any legal duty, without offering or doing violence to the person of the officer, shall be guilty of a misdemeanor of the first degree, punishable as provided in s. 775.082 or s. 775.083.” (Emphasis added)