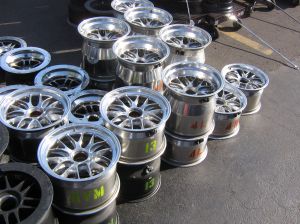 Richard Murphy is a football player for the Jacksonville Jaguars.  Last month, his truck was stolen and burglarized.  He found his Dodge Ram missing on Thursday morning.  He found broken glass surrounding the area where he left his truck.  He parked it on the Southside of town on Gate Parkway at the Citi Gate apartments.  The Jacksonville Sheriff’s Office found the at Brackridge Park, near Hogan Road.  Murphy’s truck was on blocks.  The truck was missing the tires and 30-inch DUB rims.  The tires and the rims were valued at $15,000.

Stealing a car is called grand theft auto in Jacksonville, Florida.  If a person steals tires or rims from a vehicle, this is Jacksonville grand theft, because tires and rims are valued at $300 or more.  Under Florida law, Jacksonville petit theft is for property worth less than $300.  Petty theft is a misdemeanor offense.  Grand theft is a felony charge.  The Jacksonville Theft Law is in Florida Statute 812.014.

In Murphy’s case, there was more than just grand theft of his tires and rims and grand theft auto of his truck.  Jacksonville.com reported that other items were missing.  “Among other items stolen were his 2008 LSU National Championship ring, 2006 Sugar Bowl ring and 2008 SEC championship ring.”  The is burglary in Jacksonville, Florida.  There was “a 12-gauge Mossburg pump shotgun with a pistol grip” in his truck.  It was not taken with the other items.  This is probably because it was in a secure compartment within the truck.  “There was video surveillance at the apartment and police are currently investigating the crime.”

Police officers regularly do pawnshop searches.  They look for stolen items in pawnshops.  If a stolen item comes up in a search, the person that pawned it will be on file.  That person could be charged with Jacksonville dealing in stolen property and false verification of ownership.  These are felony crimes in Florida.  Depending on the facts of the case, the person could also be charge with the Jacksonville theft or burglary charge.  As a Jacksonville Criminal Lawyer, I have seen people commit crimes in a very unsophisticated manner.  Still, I would be surprised if someone were to steal and pawn a “2008 LSU National Championship ring, 2006 Sugar Bowl ring and 2008 SEC championship ring.”  Those are items that can easily be identified.

If you are being questioned about a burglary, dealing in stolen property, or theft case, you should talk to a Jacksonville criminal attorney.  Even if you are not guilty of the crime, you should not go into an interrogation room alone.  You may need to talk to a Duval County lawyer about an investigation on the Southside.  You may want to speak with a Clay County lawyer about a Fleming Island case.  Maybe, you need a St. Johns County lawyer about a burglary investigation.  You may need a Nassau County attorney for a case in Callahan, Florida.  It does not matter where you are located in Northeast Florida.  Call 20 Miles Law at (904) 564-2525.