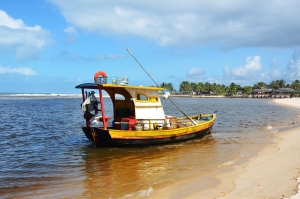 According to reports, Thomas was the captain of the shrimp boat, and he ran it aground.  As he appeared to be working with police, he just off the boat and began swimming away.  He did get away from the police initially.   Police learned that his mother had contact with him a day later.

Since Thomas was accused of fleeing from the United States Coast Guard, he is being charged with Jacksonville resisting an officer without violence.  Resisting the police without using violence cases usually occur when someone runs from the police, but we need more details to decide whether police were acting lawfully in this situation.  Thomas was also arrested for Jacksonville leaving the scene of an accident.  This is because he was involved in a boating crash and left without giving the required information.  Jacksonville Hit and Run Laws After Leaving the Scene of a Crash for car accidents can be found under Chapter 316.

Thomas “is being held on a total bond of $650,012.”  He “is scheduled to appear in court on September 16 at 9 a.m.” at the Duval County Courthouse (First Coast News).  Hopefully, Thomas has discussed his case and all of his defenses with a Jacksonville lawyer.  He will need to work with his Duval County criminal lawyer to fight these charges.