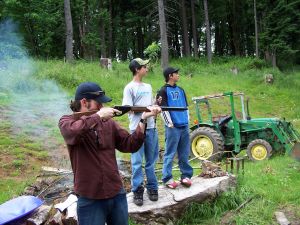 Being arrested in Florida will likely affect your gun rights in one way or another.

Have you been arrested for a felony in Duval County?  Did you plead no contest or guilty to a criminal case in Clay County?  Did you receive a withhold on a felony charge in St. Johns County?  If you pleaded guilty or no contest to a criminal case in Florida, you were either convicted of the crime or the judge withheld adjudication.  You want a withhold of adjudication, so you are not technically “convicted” of the crime.  If you are not convicted of the crime, you may be able to seal your Florida record.  If you would like to seal or expunge your Florida record, you would need to discuss this with a Jacksonville lawyer that has experience.  Another benefit of having a withhold of adjudication is that you maintain your rights, since you are not a convicted felon.  If you do not want to lose your right to vote, you should avoid a felony conviction.  Felony charges can vary from Jacksonville possession of cocaine or a controlled substance to Jacksonville burglary.

What if you were arrested for a felony and the judge withheld adjudication?  You are not a convicted felon.  Does that mean that you can buy a gun?  You need to look at Florida Statute 790.065.  It is listed below.  Note that portions have been omitted due to the length of this Florida gun law, so read the statute in its entirety.  The Florida Department of Law Enforcement (FDLE) must conduct a background check before you buy a firearm in Jacksonville.  If the FDLE finds that you “had adjudication of guilt withheld or imposition of sentence suspended on any felony or misdemeanor crime of domestic violence” within the past three years, they will not permit it.

Do not even think about having a friend or family member by a gun or other firearm for you. Jacksonville Florida gun laws make this a crime.  It is a third degree felony for someone to knowingly acquire “a firearm through purchase or transfer intended for the use of a person who is prohibited by state or federal law from possessing or receiving a firearm.”

Florida Statute 790.065 governs the sale and delivery of firearms in Jacksonville and other cities.  It states:

“(2) Upon receipt of a request for a criminal history record check, the Department of Law Enforcement shall, during the licensee’s call or by return call, forthwith:

(a) Review any records available to determine if the potential buyer or transferee:

1. Has been convicted of a felony and is prohibited from receipt or possession of a firearm pursuant to s. 790.23;

2. Has been convicted of a misdemeanor crime of domestic violence, and therefore is prohibited from purchasing a firearm;

3. Has had adjudication of guilt withheld or imposition of sentence suspended on any felony or misdemeanor crime of domestic violence unless 3 years have elapsed since probation or any other conditions set by the court have been fulfilled or expunction has occurred; or

4. Has been adjudicated mentally defective or has been committed to a mental institution by a court and as a result is prohibited by federal law from purchasing a firearm.”

This Florida gun law gives other reasons that will cause a gun store to refuse to sell a firearm to you.  It states that the firearms dealer shall:

f. Weapons and firearms violations under this chapter.

If the review indicates any such indictment, information, or arrest, the department shall provide to the licensee a conditional nonapproval number.