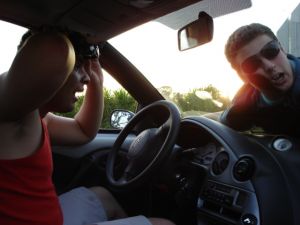 For anyone that visited Mavericks Rock N’ Roll Honky Tonk located in the Jacksonville Landing last Thursday night, this was no ordinary night.  It appears that a man is suspected for several criminal charges.  In particular, police are looking to charge him with a hit and run car accident.  This is known as Jacksonville leaving the scene of an accident.  Many leaving the scene of an accident cases are misdemeanors because they only involve property damage.  The suspect driver of this hit and run accident will probably be charged with a felony due to the injuries involved.  (Read Jacksonville Leaving the Scene of An Accident after Florida Car Crash for more information about Florida’s hit-and-run laws)

According to Jacksonville news reports, “fights broke out after a crowd left the country bar” early Friday morning.  Anyone that fights or engages in mutual combat may be charged with Jacksonville affray.  After the fights, one man ran over another. “Friends of the man run over identify him as Taylor Evans, who’s clinging to life at Shands Jacksonville Medical Center.”  Evan’s friend, Alexandra Melendez stated, “We were just walking, holding hands because we were best friends having fun, and there was a bunch of raucous going on with other groups of people.  All the sudden I’m looking for my car, I heard a big screech and slam, and I look over to the right two seconds later and Taylor was laying on the ground in a puddle of blood.”  Melendez further stated that “Taylor wasn’t fighting, Taylor wasn’t doing anything wrong.”  (News4Jax.com)

The Jacksonville Sheriff’s Office stated “there were several fights at Mavericks that continued into the parking lot a few hundred yards away. That’s when witnesses told officers a man hit and then ran over Evans. Evans’ friends said he was an innocent bystander.”  Witnesses to this Jacksonville hit and run accident informed the police that “the man who hit Evans sped off in his white pickup truck. They said he hit other cars along the way. Someone else chased him, and witnesses say stopped him at gunpoint. Then police caught up and took the man in for questioning.”  It is important to remember to use care when using a firearm.  You do not want to end up with a Jacksonville gun charge when you are merely trying to help another person.  While you may be able to argue that you were acting in self-defense in Florida, you still should be careful and talk to a Jacksonville gun lawyer.

Police “investigators with the Jacksonville Sheriff’s Office are looking for a woman who was battered by a man outside the Jacksonville Landing prior to [the] hit-and-run crash in the parking lot across the street.”  The battery occurred between midnight and 2 a.m. early that Friday morning.  If the woman was not a “family member” under Florida law, the man could be charged with Jacksonville simple battery.  If the woman as in a familial relationship with the suspect, he could be charged with Jacksonville domestic battery.  Police want to talk to this woman, because she may be a witness to the hit-and-run accident.  “Police said it does not appear that the woman filed a police report in reference to the battery.”  No arrests have been made, yet.