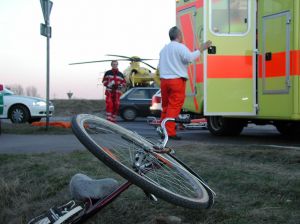 Driver left the scene of the accident after bike rider was hit by car in Jacksonville, Florida.

As a Jacksonville criminal lawyer, I like to write articles about Florida’s criminal laws.  I also like to write about experiences that I have encountered in my career as a Jacksonville criminal defense attorney.  Sometimes, I enjoy posting blogs about local news.  I read the local newspapers, such as the Florida Times Union.  I also browse through Jacksonville.com to check out the headlines.  I think the most interesting articles tend to be about crimes committed in Duval, Clay, Nassau, and St. Johns County.  These are things that are basically happening in our backyard, so we should take an interest in them.

This week, I have been read a lot about Jacksonville hit and run cases.  In fact, I already wrote two articles this week about Jacksonville leaving the scene of an accident allegations.  You may read Another Jacksonville Leaving the Scene of an Accident Hit-and-Run Case and Jacksonville Police Investigate Hit and Run Accident and Battery Charges for more information.  For the third time in a matter of days, I read about another Jacksonville hit and run case in the Florida Times Union.   On Tuesday night, around 8:20 p.m., Lorin Leuthold was riding a bike.  Leuthold is 48-years-old.  He was riding his bike in the bicycle lane of Philips Highway just south of Bayard, and a car struck him.  The vehicile did not stop.  Phillips Highway is also known as U.S. 1.  When he did not return home, “friends went searching for Leuthold about two hours after he was hit and called 911 when they found him lying in the ditch, according to the Florida Highway Patrol. He was transported to Orange Park Medical Center and remains in critical condition.”

Regardless of the reason, the driver of the car that left the scene of this hit and run accident is in trouble.  He or she should talk to a Jacksonville criminal defense lawyer as soon as possible.  If you need to contact a lawyer in Jacksonville, you may call or email 20 Miles Law.