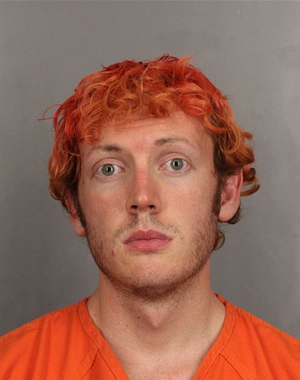 James Holmes is the man accused of committing a mass shooting.  He was arrested for killing 12 people and wounding 58 others at a movie theater in Colorado.  Media reports, Holmes, “was not on drugs when he appeared dazed in court, but experts are looking for explanations for his odd behavior that included turning evidence bags on his hands into puppets after his arrest.”  People are asking if he is displaying signs of psychosis or just faking it.

Holmes was arrested after going on a shooting rampage at a Colorado movie theater during a Batman screening.  After his arrest for several murders:

“ he told police he was the fictitious Batman villain, The Joker. When police put evidence bags over his hands to preserve traces of gunpowder residue, Holmes pretended the bags were puppets… Holmes has acted unfazed by his arrest, police say. He has been uncooperative since he was taken into custody, giving investigators little information, and yet disclosing his apartment was booby trapped with dozens of explosives.”  (Yahoo.com)

He went to court last Monday.  He had bright orange hair and acted very sedative.  He “alternated between staring wide-eyed to closing his eyes and appearing to nod off.  His lawyer even had to nudge him to rise when the judge entered the courtroom. He said nothing during the proceedings, in which he was held without bond.”

Reports state that he “was not on drugs, leading to expert theories that he may have been in the grips of ‘psychotic episode,’ exhausted from stress or simply faking it.  Marissa Randazzo is a former chief research psychologist for the U.S. Secret Service and an expert in mass shootings.  She stated, that he may have been “in the middle of a psychotic episode.”  He may have been subject to mania, “meaning hyperactivity, hyper energy, been possibly up and not sleeping for days.”  If that is the case, his actions in court show him coming out of this mania.  It is also possible that Holmes is faking the whole thing.

In some criminal cases, a defendant’s mental health will be relevant prior to sentencing.  Florida’s criminal laws address two situations in which a person’s mental health will actually affect the legal proceedings and court process.  A Florida criminal defendant may be “incompetent to proceed” or “not guilty by reason of insanity.”  The 11th Judicial Circuit in Miami gives a good explanation of the difference between incompetence and insanity when if comes to criminal defense in Florida.   This Florida Judicial Website gives the following information:

What does “incompetent to proceed” and “not guilty by reason of insanity” mean in criminal court cases?

In criminal court, competency refers to defendants’ ability to proceed in various stages of a case. By law, defendants are found incompetent to proceed if they do not:

When defendants are found incompetent to proceed, criminal court proceedings are halted. If competency is restored, defendants return to court and criminal case proceedings resume. Not guilty by reason of insanity excludes a defendant from criminal responsibility based on his/her mental state at the time of the alleged crime. It is not a general incapacity or mental illness, but a mental deficiency that impaired a defendant’s ability to understand the wrongfulness of the conduct and/or the consequences of his or her actions. Please refer to the following references for specific information on Florida laws which govern criminal court proceedings involving mentally insufficient and mentally ill defendants.  (Florida Statutes, Chapter 916; Rules of Criminal Procedure, Rules 3.210 – 3.219)