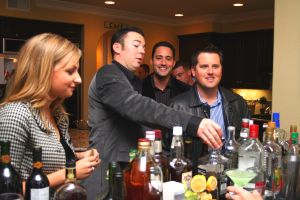 In Jacksonville, we have a lot of social clubs and networking events. Many of these social clubs include having drinks with friends. For example, there is the Thursday Night Drinking Club which meets all over Jacksonville. The Thursday Night Drinking Club has had some events at the Jax Beach bars, such as the Pier, Billy’s Boat House, and the Wine Bar. They have met at bars in Atlantic Beach. This group has hosted events at Suite at the St. Johns Town Center and in restaurants in Riverside and San Marco.

Jacksonville bars will host events with drink specials during the week. Urban Flatts hosts ladies night and wine down Wednesdays. Mavericks hosts Thirsty Thursdays at the Landing. When you attend a sporting event, such as a Jaguar’s football game or a Jacksonville Sun’s baseball game, people will be consuming alcohol. The police know this. Quite often, there will be a couple of police officers patrolling the area. They are expecting to catch people that are drinking and driving. If you are stopped leaving one of these events or bars, the police are already thinking that you are driving drunk.

You do not have to be drunk to be arrested for DUI in Jacksonville. Instead, you can be arrested for driving under the influence if police believe that you were impaired by alcohol or a controlled substance. As a Jacksonville DUI lawyer, I know that Florida DUI arrests go up on holidays and around certain events. The 4th of July, New Year’s Eve, and the Florida-Georgia football game lead to many driving under the influence arrests in Jacksonville. Police have an expectation that people are drinking and driving and are looking to make an arrest. When attending an event or festival involving alcohol or you are going out on a holiday, always have a designated driver or take a taxicab. It is a lot cheaper than a Florida DUI charge.

If you are arrested for driving under the influence in Duval, Nassau, St. Johns, or Clay County, talk to a Jacksonville DUI Lawyer immediately at a Jacksonville Law Office. Do not just plead guilty or no contest in first appearance court at your bond hearing.  At minimum, You will be facing a probation sentence that could result in violation of probation in Jacksonville. A Florida DUI charge cannot be sealed from your criminal record if you pleaded guilty or no contest, because it results in a conviction or adjudication of guilt. A Jacksonville driving under the influence lawyer can help you fight your DUI case and make sure that your rights were not violated. Call a lawyer in Jacksonville at 20 Miles Law with experience with Florida DUI cases. A Jacksonville criminal attorney will fight for you, so call (904) 564-2525.